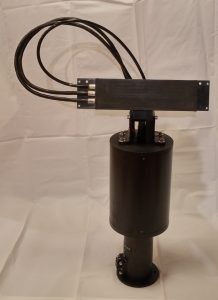 Does your application require simultaneous, co-located side scan image and bathymetry sonar data, or a vector scan sonar that can gather simultaneous, co-located image and profile data? The TSR-3000 3-D Sonar is a high performance modular sonar system that can be configured to your requirements. In the TSR-3000 Sector Scan configuration with a rotator, the TSR-3000 can be used to collect simultaneous profile and image data. In the side scan configuration, the TSR-3000 can be used to collect simultaneous bathymetry and side scan image data. The TSR-3000 Sonar can output raw carrier wave sampled data from each receive channel for advanced beam-forming, bottom classification and sonar data filtering.